a joyous blessing instead of mourning,

festive praise instead of despair . . . ”

Pray for Randy Wilson and his family.  He has had emergency surgery and is facing recovery and possibly more surgery.  He requested his family sell the dairy cows.  Pray for all the family as they make big adjustments.

Pray for churches, schools, businesses, etc. as they make decisions about how to address Covid -19 on a continuing basis.

Also, pray for those with health concerns as they make decisions about daily living in the present conditions. 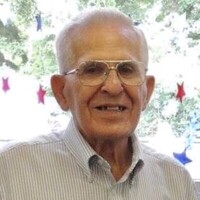 Nick P. Ardillo, Sr., a resident of Amite, LA, passed away at 6:35 AM on Sunday, July 5, 2020, at his home, surrounded by loving family and listening to a favorite hymn, “Be Not Afraid.” As a family we are terribly sad to have lost the companionship and guidance of our father but are heartened by the knowledge that he will rise to be with our Father in heaven.

Nick was born September 8, 1926, in Amite, LA, and was 93 years of age. He had many jobs over the years, beginning at age 12 pushing a broom at Ardillo’s grocery. He spent some time as a cowboy on horseback rounding up his dad’s cows and driving them home after they spent the day grazing amongst the trees near the current location of the Tangipahoa Parish School Board. When he graduated from high school at 16, he went north to Carbondale, Illinois, to attend railroad school to work for the Illinois Central Railroad. At 18 he left to train for WWII and the invasion of Japan. Before shipping out to the Philippines, he paid another soldier to take the swimming test for him so he would not be required to wear a lifejacket for the entire trip. When the war ended abruptly, Nick was assigned to drive a general at Yokohoma. Nick explained that at only 5’4” tall, his feet could not reach the pedals of the general’s staff car, so he had to settle for driving a colonel. While in Japan Nick learned to play golf and later became one of the charter members of the Springview Golf Club.

On June 26, 1950, he married the love of his life, Angie Bellavia. He worked with his father Roy, stepmother Josie, brother Tony, and sister Little Josie for many years and was eventually president of Ardillo Inc. For many years he was a board member of Central Progressive Bank and was a longtime member of the board and president of Progressive Developers. He suffered many trials during his long life, losing his mother Mary when he was seven and his father when he was thirty-six. He also was the last survivor among his siblings. He lost his son and namesake Nicky in 2001 and his beloved wife Angie in 2002. He lost two more sons Roy and Rube in 2012 and 2017 respectively.

Nick lived at home with grandsons Joseph and Jonathan Ardillo, maintaining his independence until he went into the hospital on June 28th, when he dressed and made his coffee that Sunday morning. The doctors, nurses, and staff of both Hood Memorial and North Oaks Medical Center made a valiant effort, but in the end the best thing was to do was what Nick had directed and let God decide. His family brought Nick home on Friday afternoon where he was met by The Reverend Mark Beard and given the Holy Eucharist and Last Rites.

Due to the COVID 19 pandemic, services will be held privately. A memorial service will be held at a later date for extended family and friends. In lieu of flowers, donations may be made to St. Helena Catholic Church or charity of your choice. McKneely Funeral Home, Amite, in charge of arrangements. For an online guestbook, visit http://www.mckneelys.com.

Operation Christmas Child – Online shopping has been used to make a number of purchases this year.  Thanks to those who gave and those who “shopped”.  As you thank God for the givers and the shoppers, also pray for those who will receive the boxes along with the opportunity to learn about Jesus.  May their heart be open for Jesus.

Make today a day of prayer, encouraging, and action to benefit others.  Remember that great old hymn, “Others”.