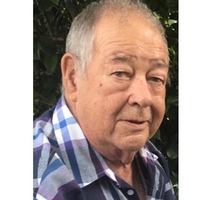 He was born June 22, 1943 in Pine Ridge.  He was the son of Clyde Lea Phillips and Sudie Rimes Phillips.

Mr. Phillips was a longtime member of Pine Ridge Methodist Church.  He was a retired Boilermaker with Local 582 in Baton Rouge. He was an excellent mechanic and welder. His favorite pastime was fishing, especially with his grandchildren and he also loved hunting.  Mr. Phillips proudly served in the Merchant Marines.

He is preceded in death by his parents; one daughter, Cheryl Lynn Phillips; one grandson, Rodney Strickland and a brother, Clyde “Dutch” Phillips.

He is survived by his wife of 40 years, Lauree Phillips of Pine Ridge; two sons and daughters-in-law, Adrian “Phil” Phillips, Jr. and Shona and Ivy “Shorty” Williams and Annette of Pine Ridge; two daughters and sons-in-law, Mona “Dee Dee” Tantillo and Jory of Albany, LA and Verda Strickland and Ronnie of Kentwood; one brother and his wife, Dennis and Cindy Phillips of Pumpkin Center, LA; four sisters and their husbands, Kathy and Bruce Harrell and Ginger and Tommy Travis of Kentwood, Marsha and Rick Vogler of Pensacola and Janet and Jimmy Myer of Hammond; his former wife and mother of their children, Joan Martin of Albany, LA seven grandsons, Tyler Travis, Hunter Phillips, Jerod Phillips, Jake Phillips, Colton Strickland, Sawyer Tantillo and Austin Williams; three granddaughters, Kristan Travis, Jordyn Tantillo and Delaney Phillips; thirteen great-grandchildren and numerous nieces, nephews and other family members and friends.

Visitation is Tuesday at Pine Ridge Methodist Church, 3893 LA-440, Kentwood, LA 70444 from 5PM until 9PM and Wednesday, August 14, 2019 from 8AM until services at 10AM with Michael Townsend officiating.  Burial will follow in the church cemetery under the direction of Sharkey Funeral Home in Summit.