“So if the Son sets you free,

you will be free indeed.”

Young Jules Tanksley had a good day yesterday.  Thanks to Children’s Hospital in NO for taking good care of many children from our area.  Hopefully, Jules’ parents will be bringing her home soon.

Mr. Frank Erwin may be able to leave North Oaks and return home later today.  His condition is treatable with medication. 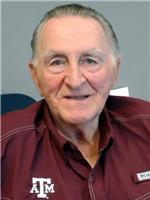 James M. Burch (Major, Retired, USAF) was born on July 26, 1931, in Liverpool, LA, and passed away Monday, March 11, 2019, at the age of 87. Having grown up on a farm in rural Greensburg, LA, he learned the value of hard work. He was a graduate of Louisiana State University and proudly served our country for more than twenty years in the United States Air Force. He had assignments at Goose Bay Air Base in Newfoundland, Canada, the Republic of China (Taiwan), and Dyess Air Force Base in Abilene, TX, and flew missions in Vietnam during the war. Following his military duty, he began his second career as a federal civil servant working in the United States Department of Labor for the Occupational Safety and Health Administration. His final days were spent surrounded by family during a short stay at the Northeast Louisiana Veterans Home. He was a long-time member of Oakcrest Baptist Church and resident of Baton Rouge but most recently lived in Monroe, LA with Jerre, his wife of 51 years. He is also survived by four loving children, Chip Birch (Lisa), Sheree Burch Phifer (Glenn), Mary Burch Mangham (Doug), and Shawna Burch Johnson (Alan). He also leaves behind eight grandchildren, Trey Birch (Meghan), Travis Phifer (Taylor), Victoria Phifer, Regan Mangham, Emery Johnson, Major Mangham, Reid Johnson, Daniel Birch; and two great-grandchildren, James Birch and Cindy Birch. He is also survived by five sisters, Barbara McDaniel, Jane Duncan, Grace Helen Williams, Cheryl Scott and Beverly Easley. He was preceded in death by his granddaughter, Sarah Birch; parents, Clifton and Rena Burch; sister, Carolyn Easley; and brothers, Jack Burch Sr., Donald Ray Burch and Percy Dean Burch. A memorial service will be held at New Zion Baptist Church in Kentwood, LA, at 11:00 AM on Saturday, April 6, 2019. In lieu of flowers, memorial may be made to the . Online Registry/Condolences: www.mulhearnfuneralhome.com. Mulhearn Funeral Home, Sterlington Road, Monroe, LA.

The youth of FBC, Kentwood will have a fundraiser for camp expenses next Sunday.  The youth from SCBC will have a BBQ chicken on the following Tuesday.

Thank God for protecting us during last night’s storm.